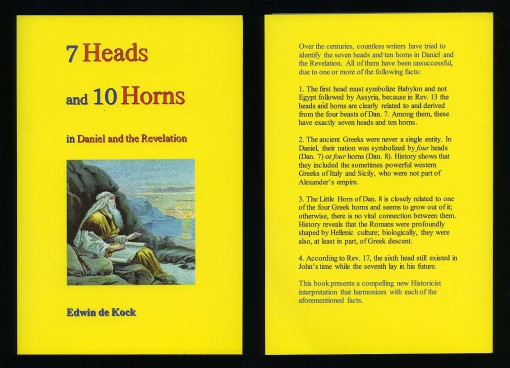 Over the centuries, countless writers have tried to identify the seven heads and ten horns in Daniel and the Revelation, but none have been successful due to the following facts:

1. The first head must be Babylon, not Egypt or Assyria.
2. The ancient Greeks were never a single entity. In Daniel, they have been symbolized by four heads (Dan. 7) and four horns (Dan 8). The powerful western Greeks of Italy and Sicily were never part of Alexander’s empire.
3. The Little Horn of Dan. 8 is closely related to one of the four Greek horns and seems to grow out of it, forming a vital connection between them.
4. According to Rev. 17, the sixth head still existed in John’s time while the seventh lay in his future.

“Edwin de Kock puts all of the biblical clues together to present a compelling, new Historicist interpretation with his clear and engaging style that helps it all make sense.”—Jeff Reich of Laymen’s Ministries International.